Prague is the capital and also the largest city of Czech Republic, which lies in the very heart of Europe surrounded by Germany, Poland, Austria and Slovakia. Prague lies in the centre of Bohemia on Vltava river (Moldau river) and it’s centre of politics, economics, culture, education and science. 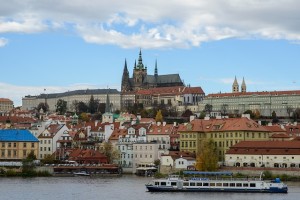 Capital city of Prague has an area of 496 km2 and has population over 1.2 million. Historic centre of the city with the unique panorama of Prague Castle and Hradčany is UNESCO World heritage site since 1992. But Prague is generally known as one of the most beautiful historic cities in Europe and thanks to that amply visited by tourists. It’s even one of the most visited sites of Europe.

Prague has many sights, the city centre alone offers over 1200 historic and cultural buildings, overall there are almost 3000. This capital is noted for rich culture happenings. It’s place of many theatres, among them National theatre from 1881 and State Opera from 1888, concert halls like Rudolfinum, but also music and dramatic festivals, for example Prague Spring or Summer Shakespeare fest.

Former name of Prague was Royal city of Prague from 1784, but since 1920 Capital city of Prague is used. In foreign languages we can find Prag, Prague, Praga etc. But where does word Praha originate is subject to many discussions. One of theories is based on derivation from the word “práh” (sill, threshold), but in the mean of “říční práh” (river crossing, ford or rapid). This ford is believed to be in the location, where stands Charles Bridge. Thanks to that the city was built around this ford, it was called Praha. Another view to the origin of name is in Czech legends, where Libuše had the city build on the place, where settler chiselled a threshold of his house. 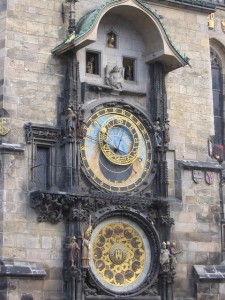 Prague Castle: is undoubtedly the most visited sight in Prague. The largest castle complex in the world is home to the St. Vitus Cathedral with Czech crown jewels, Golden Lane, gardens and halls.

Charles Bridge: The oldest standing bridge over Vltava in Prague was built in 1357 upon request of Charles IV. It provides beautiful view over the Prague Castle.

Old Town Square and Orloj: Astronomical clock on the Old Town Square attracts crowds of tourists, which are waiting for show every hour. Twelve Apostles show in two windows while Death is ringing bell. Nearby Týnský chrám (Church of Our Lady before Týn) is another dominant of Old Town.

Vyšehrad: Walled fortification dating to the 10th century and containing several interesting historical sights, such as the Romanesque Rotunda of St. Martin, the Gothic Church of Sts. Peter and Paul, and the Slavin Cemetery, where the nation’s most famous personages are laid to rest.