The Magic of Silesian Cuisine

The Silesian cuisine is quite rich regional cuisine of the northern part of Moravia and the area of southern Poland near the borders with Czech Republic. Local cuisine is influenced heavily by Polish and German cookery but also by Pomeranian and East-Prussian regional cuisine. Some of the specialities which have origin in the Silesian region are now cooked predominantly in Germany. Regional dishes are quite simple yet very tasty. Their preparation is based on local ingredients and culinary skills which are passed on from generation to generation. 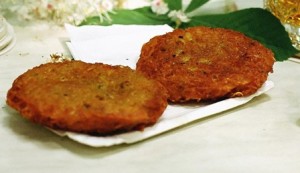 One of the traditional ingredients in Silesian cuisine is potatoes. These serve as a side dish, for potato soup, or as the main course in form of potato pancakes. Other ways of preparing potatoes include various mashes, dumplings or small gnocchi-like potato bits. Potatoes are cooked both peeled and unpeeled – in dependence on the recipe. They could be boiled in water, baked or fried. People usually drank fermented milk, buttermilk or usual fresh milk. Potato pancakes were made with raw potatoes, usually grated, and milk, eggs, flour, and to taste people usually add lots of garlic and marjoram which give these pancakes its unique flavour. The basic ingredients could be enriched by some kind of smoked meat like sausages or even bacon.

Various kinds of potato gnocchi and dumplings also have a long tradition not only in Silesia and the Czech Republic but also in Slovakia. Potatoes are used in dough which is then rolled up and boiled in a form of small cylinder and then it is sliced and served with meat and cabbage. Another way is to prepare the dough and by tearing it off with your fingers making small bits which are thrown into boiling water. When cooked, these small pieces of boiled potato dough are served with sheep cheese called bryndza or with cabbage, fried onion and bacon.

A traditional Polish appetizer prepared also in the border areas among Poland, Czech Republic and Germany is Bigos. This speciality is also known as the hunters stew and is made with cabbage and meat. Typical ingredients are cabbage or sauerkraut, whole or puréed tomatoes, honey, mushrooms and various cuts of meat and sausages. The meat used in bigos can be pork, ham, bacon, sausage, veal, beef and, since it is considered a hunter’s stew, it may include venison, rabbit or other game. Leftover cuts find their way into the pot as well. It may be seasoned with pepper, caraway, juniper berries, bay leaf, marjoram, paprika, dried or smoked plums, and other ingredients. Bigos is usually served with mashed potatoes or rye bread. As many other stews, this meal can be kept in a cool place and later reheated.

Various soups are an inseparable part of each meal in this regional cuisine. They are made with pretty much everything you find in a Silesian garden, but the most favourite ones are garlic soup, potato soup and cabbage soup. Cabbage, by the way, is also very popular and served as a side dish to various meals. As a dessert you can have local Ears of Štramberk (Štramberské uši), which is a kind of gingerbread pastry rolled into a shape resembling ears and, as the name suggests, it comes from nearby Štramberk. Silesian cuisine is undoubtedly very rich and has had great influence on the surrounding regions of Germany, Czech Republic and Poland and some of the meals from this region have become traditional parts of national cuisines of these countries.