Gingerbreads are unforgettable part of Czech Christmas. Preparation is not difficult, you just need to put baked gingerbreads aside for 2 weeks and wait till they soften. That’s why you can start baking at the start of December. You can cut different shapes of animals and motives from the dough. Also you can prepare sections and build a house or tree. Advent wreath from gingerbread is also amazing.
After baking we can decorate them with sugar topping.

Potato salad is traditionally served with Schnitzel and cannot miss at Czech Christmas dinner table with carp. Every family prepare potato salad by their own recipe according to their taste and customs. 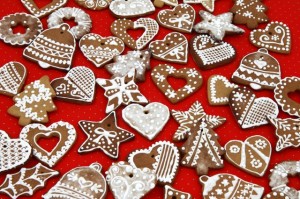