When you say Czech Republic in the world, some people recall Czech hockey and sportsmen, Václav Havel or endless politics affairs. What will pop surely in their heads is undoubtedly Czech beer. Czechs are rightfully nation of beer drinkers. From 2008 Czechs are on the first place in beer consumption. Every Czech drinks unbelievable 160 litres of beer per year, that’s 320 pints even counting small children.

History of beer in Czech countries dates back to the end of 10th century to Břevnov monastery. Although archaeological research proved that beer was brewed in the times of Germanic tribes. The oldest record of hop cultivation is charter of Břetislav I. from 1034. Great milestone in beer brewing was foundation of Pilsner Brewery (Měšťanský pivovar v Plzni) in 1842. They used bottom fermentation and this method quickly stepped forward among rivals. It was so popular that this type of beer is called pilsner ever since. That was the start of golden age in Czech beer production. Large breweries started step forward and small breweries perished. In a few years Pilsner was available across whole Europe and a special train loaded with beer departed to Wien every morning. 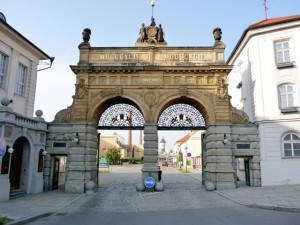 To be a genuine beer drinker, you should know at least basic facts what makes Czech beer so popular. České pivo is a protected geographical indication (PGI) by EU. It marks out thanks to the use of high-quality ingredients from specified regions, classic technology and procedure of production and of course the craft of Czech master brewers. Especially Žatec region provides the world’s best quality hop so essential for brewing. Another essential ingredient is barley for malt, although some brewery may use wheat or other grain.

Most popular Czech beers are lagers of pilsner style. Pilsner Urquell is considered the best among Czechs, but Gambrinus is perhaps the most consumed. Another great brewery is Staropramen, which sets in Prague. In Moravia, Radegast is very popular for its bitter taste. There are also quality beers from small breweries available in pubs and beer specials. Such specials can be found in several joints, for example U Medvídků, where you can taste a 33° beer. A famous restaurant with own brew is U Fleků, where you can taste traditional dark beer with quite similar taste to Guinness. And of course there’s Prague Beer Museum with 30 beers on tap from micro-breweries.
Last but not least beer is great source of vitamin B and since beer in Czech Republic is literally cheaper than water, why not to come and taste for yourself.